What words cloud within one's mind?

(This story incorporates all the words from this Twitter word cloud, which you can get by following @wordnuvola and tweeting  #wordcloud @wordnuvola at them - it may take a day to get a reply.) 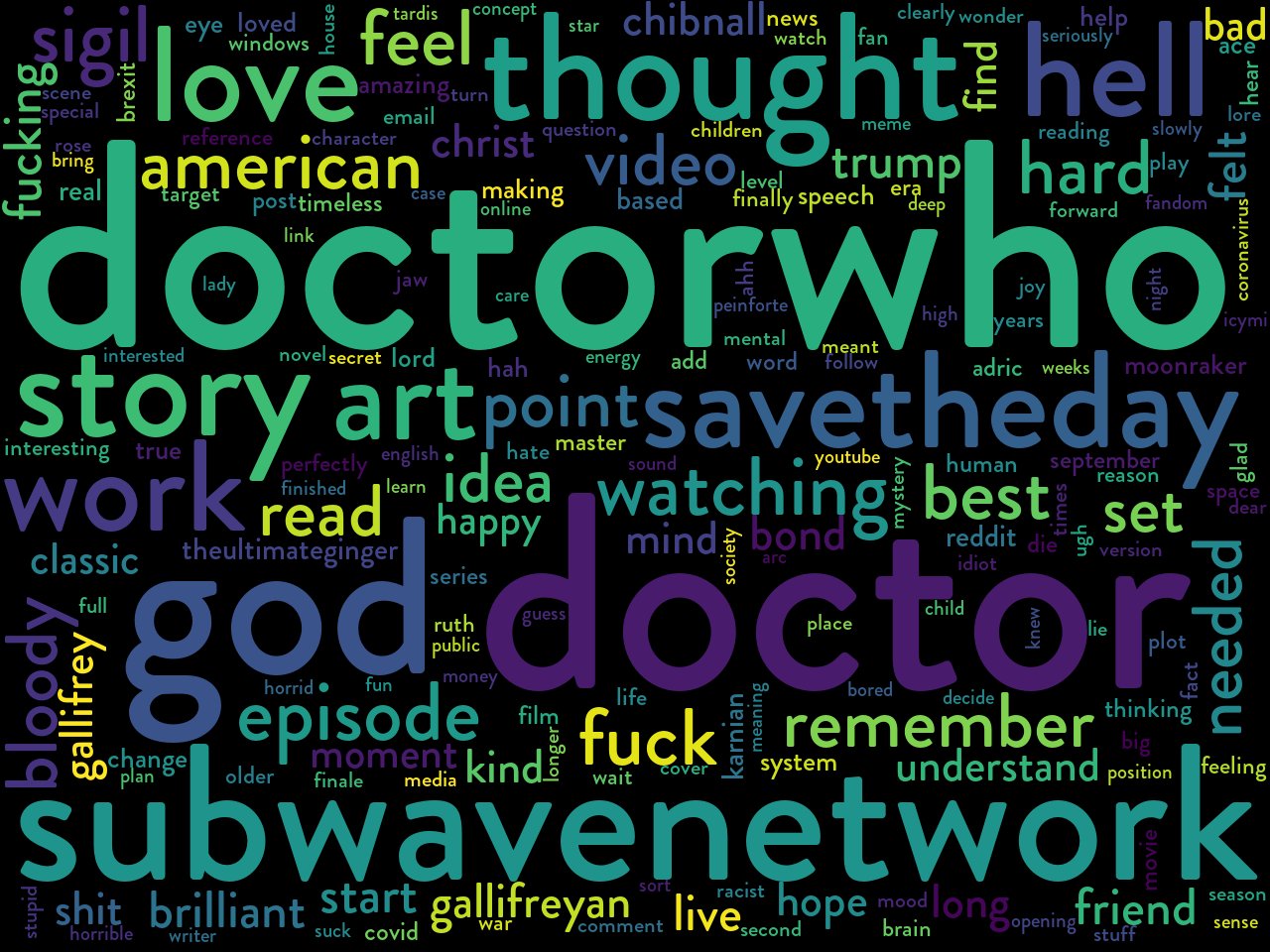 “So my brilliant start for this Reddit post fic is going to be set during the height of a Gallifreyan War,” I began. “The Doctor and the Master are stuck in a Karnian mind-bond as a result of their trespassing onto the Sisterhood’s planet in order to defeat of a resurrected Time Lord madman based there who’s basically a more racist Space-Trump and also sort of the Ultimate Ginger. His sigil--”

“--Let me guess,” _____ rudely interrupted. “Because of the mental link they can’t help thinking each others’ thoughts, causing all kinds of deep secret feelings to come forward, until finally they can no longer hold back and they fuck.”

“Ugh.” I sighed. This is what it’s like to live with someone you love, I mused. They knew my secret proclivities as a shit fan writer all too well. I was obligated to defend myself and my craft.

“God, ______, it’s not like they just stumble into the TARDIS and start going at it on the console like Adric and Nyssa or Ten and Rose like in those things you see on Tumblr. Don’t be such an American about it, there’s reason to it. It makes sense if you buy into the concept they’re forced to reveal their most intimate thoughts to one another in a time of high stress and adrenalin release. It’s not like they were bored or something and just decided to go at it.”

“Oh, I guess the English are much more sophisticated about it,” he replied in a dryly sarcastic tone that was clearly plagiarised from me (and which I despised whenever it was turned against me- it was my weapon, damn it.) “Tell me, ‘Lady’ Peinforte, about how it’s actually a carefully crafted classic work about of hatred and love between two friends-cum­-enemies whose horrible lives are inevitably intertwined by fate with bonds forged through a mutual hell that intensify until they experience the timeless joy and wonder of the ultimate mystery of life, two children now adults who finally learn the meaning of their place in the universe as they lay in each other’s arms watching each other breathe in the amazing afterglow of their forbidden passion, finally allowed to truly feel for the first time unbound by the conventions of society.”

Well that was certainly a mood evoked. It was all I could to keep my jaw from dropping. I needed a moment. I was having a moment.

At a momentary loss for speech, I finally coughed, and then spluttered “Well that’s what it bloody is, isn’t it?”

I stuck out my tongue defiantly. “Pure art. Not just stuff about fucking. A story arc with perfectly balanced mood like you’d find in a movie, with special scenes that not only elevate the characters’ personal lore but which bring real emotion to the moment and tears to the eye- especially when they finally devise a plan and save the day in the finale, fueled by naught but love. If it was a film it would be a masterwork. It would earn the Palme d'Or.”

“Seriously?” he replied, somehow incredulous of my impassioned defence. (Clearly there was something wrong with him.) “You just want to write stuff like this to slowly play the online fandom and bend characters to your shippers’ vision so that eventually something like Ace x Pex would happen and no one would blink an eye!”

Unable to help myself, I ran the scenario through my brain for a moment. Ace x Pex might be an interesting season opening for a Chibnall-like series of dark, bombastic, action stories with the profane energy of a New Adventures era Doctor Who novel. They would be assigned missions over a secret subwave network run by a stand-in for Peter Graves. There would, of course, be a horrid attempt at topicality where a post-Brexit, slightly older and more mature Pex, having recently come back from the dead, is infected with a case of coronavirus and is forced to self-isolate for two weeks so that after the fortnight was over the release of pent-up emotions and energy that would follow results in a most intense reunion. Nitro-9 wouldn’t be the only thing exploding that night. Ahh, that would be a fun “episode” to write. It was already forming as a plan in my mind. Pex would Spider-Man high up the side of Ace’s house late at night, opening up one of the windows… As she spied him, eyes opening wide, she would realise that her dilated pupils weren’t the only big things making an appearanc--

“--Geez, you’re actually interested in that, aren’t you?” _____interrupted, shattering the scenario in my brain like a burst soap bubble. Christ. Sometimes I resented having to interact with other human beings.

“Hah!” I scoffed, “don’t be an idiot. What’s interesting about a story based on an adolescent tête-à-tête between two people who would clearly not be attracted to one another in the slightest?”

“You were making happy sounds under your breath. There’s no question what you were thinking about.”

I most certainly was not. Making happy sounds I mean. I’m fairly certain, at any rate.

“Dear,” I began dangerously, menace dropping from my every word, trying to turn the tide of this conversation, “Circling back to where this discussion began, I really think you ought to wait to judge the full scope of my story idea until you’ve finished reading it. You’re making a generalisation about the plot from just one part of it. ICYMI I have a much greater range when it comes of my work.”

“There’s also the fact you Photoshopped a cover picture of the two of them making some kind of a pretzel-shape with each other backlit by the lights of the Capitol on Gallifrey. How does that even work? Isn’t the planet in some kind of Ice age? Wouldn’t they die?”

Gah. He’d seen that, then. “You suck,” was all I could retort with, momentarily at a loss for words.

“So’s the Master in thi—” he began. That was enough of that! Just because something was true didn’t mean it was meant to be a scoring point in our interpersonal debating society.

“--Listen love isn’t Moonraker on telly? You love that movie.”

“Why don’t you go play the video, then? I think you can get it on Youtube?”

“I’d like to watch it with you~” I replied coquettishly. This was usually an effective strategy with him, one I dearly loved employing.

He coughed and rushed off to queue it up, nothing left to add to the argument. The target had been hit. Hard. You might think I’d’ve felt bad about such base manipulation, but I was unrepentant. Thankfully my life wasn’t a version of that meme you reference where the girlfriend is kicked out of the house in favour of the games system.

As he left, I reflected on the fact that even though, looking at the media and the news the world and the public was being fairly stupid right now, for me these were the best times, these last years having given me a sort of sense of hope I had long needed. I was glad for the change and care that had come over my life.

Yes, I reflected, a lot had changed and was changing for me. But as I reflected on the notion of a tale featuring The Ruth Doctor working a case to overthrow a corrupt galactic mega-star who was pitching a corrupt GoFundMe style service whose ads ate people’s minds (and stole their money), and Ruth consequently finding a deep passionate love with the Face of Boe expressed through email one hot, steamy September, I knew the best things would never change.

“I hear you making happy noises again,” he teased from the other room.

Having successfully invaded both America and Canada from her home base in Windsor, Paisley has become horribly corrupted by the world. She hates active voice and wishes to god Twitter had an edit button. Dedicated to "creating the greatest 'Ship of them all", she ponders horribly terrible, idiotic things for your amusement.

I'm a snarky, semi-horrible human being given to penning intentionally bad epic slashfiction involving improbable objects and individuals, with the ultimate ambition of befouling Kindle with it one day,which is ostensibly what this blog is for.

In practice, however, it tends to mainly be a circular file for my various thoughts and ideas, some whimsical and others not, in addition to my various Photoshop experiments, mainly collections of what I generate for Twitter.